One year ago today Jonathan had his first open heart surgery (OHS), the Norwood procedure. It is one of the most complicated, of the “standard” surgeries performed for CHD (congenital heart disease).

With our middle boys still being so young (one year and three years old at the time) we couldn’t stay at the hospital full time with Jonathan. It hurts your heart as a parent to feel like you’re having to choose between your children. Our oldest, Ethan was staying with grandparents. Any time we were at the hospital with Jonathan we felt terrible that we weren’t with the other boys, then when we were with the other boys we felt we had abandoned Jonathan alone at the hospital.

On the evening of Monday 7/24/17, after a rough day, we received a phone call informing us that Jonathan’s surgery had been rescheduled for the following morning. I was incredibly upset. The day had not gone as planned and I did not get to spend much time with Jonathan due to meeting with various medical teams and my other kiddos having struggles. I thought I was going to have all day Tuesday to spend with him before surgery on Wednesday. At this point Ethan hadn’t even gotten a chance to meet him yet. I was exhausted and emotional but I called my mom who managed to gather Ethan then picked me up so we could visit Jonathan.

We got there as quickly as we could, arriving to the Cardiac ICU a few minutes before 9pm. I was so relieved that Ethan was able to meet his baby brother even if he wasn’t able to hold him. It broke my heart to think of Ethan never getting to meet Jonathan, and Jonathan barely experiencing being held in the loving arms of his family if he didn’t survive surgery. 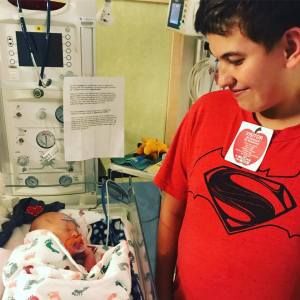 We snapped a few photos and then his nurse laid him in my arms so we could get in some comforting snuggles. Ethan sat on the couch quietly with his iPad while my mom and I whispered in hushed tones as I gently cradled Jonathan as best as I could with all of the wires and tubes attached to him.

Within a few minutes the unit secretary entered the room to let us know that we would need to leave as no visitors outside of parents were allowed after 9pm. I quickly told her that I was Jonathan’s mom and the visitors were his grandma and my 15 yr old son. I also explained that Jonathan’s open heart surgery had just unexpectedly been moved forward to first thing the next morning and this was the only time Ethan had gotten to see his brother.
Nope, it didn’t matter. No exceptions to the rule, we were informed.

That is all I have to say about that.

The next morning I remember shivering. It was the kind of cold you feel when your body is nauseous and shaky from sleep deprived exhaustion. The emotion was so thick Danny and I could barely speak. I felt angry at the world.
We were fortunate to have all of our boys’ grandparents pitch in to care for them so that all three were safely cared for while our hearts were laid open on the table with Jonathan’s.
Prior to surgery one of my sisters was able to come to the hospital and meet Jonathan for the first time. I choked on the lump in my throat as I watched her eyes mist as she stroked his soft head. Then a couple of people belonging to the prayer ministry team of a church that had been praying for us brought communion and prayed over Jonathan.

We are forever grateful to all of the people who surrounded us in support and to the medical team who cared for Jonathan. Jonathan’s surgeon Dr Jaggers is a giant among men. As a nurse I have spent time with surgeons and frequently they are brusque and don’t generally give you the “warm fuzzies.” This is not a bad thing. Surgeons have to make very complicated life and death decisions, oftentimes with only mere seconds to do so. Many times I’ve heard others complain about surgeons having a “God complex” but quite frankly, that’s not a bad thing to have in someone who is literally holding your life in their hands.

Dr Jaggers is incredibly intelligent and one of the top in his field. Danny and I were not expecting to sit down with this soft spoken man whose kind, blue eyes spoke volumes. We were profoundly touched by his gentleness with us.

We had a few moments to hold Jonathan before the anesthesiology team came for him.

It’s odd the things that one remembers clearly opposed to the things that are a fuzzy blur. We were able to walk with him to the doors of the OR. I don’t remember if it was the anesthesiologist or nurse anesthetist, but I clearly remember handing Jonathan over to this man who had enormous arms. It seemed strange to see this burly armed guy so gently cradling this tiny baby. I remember studying the tattoo on his forearm but for the life of me I can’t remember what it was. When he looked at Jonathan’s birth date he chuckled because it was nearly the same as his: 7/21/17 vs 7/21/71.
Oh good! A connection!
I always feel reassured when medical staff make some type of personal connection. I swear his name may have even been Jon. It’s terrible that my memory is hazy because this anesthesiologist has cared for Jonathan multiple times since then, you’d think I would remember.

Danny and I kissed our sweet little boy goodbye and then he was whisked away. We stood in the middle of the hallway staring at the closed OR doors for I don’t know how long. I couldn’t look at Danny because I knew we’d both burst into tears. We broke from our trance when another set of doors opened and a team came zooming in with a new patient. I immediately recognized it was a freshly born baby from the maternal fetal floor. We squeezed ourselves against the wall as they wheeled the infant bassinet into the very same room that had been Jonathan’s first room in the CICU days earlier.

I briefly peered at the precious  newborn rolling by. He had a beautiful head of dark hair.  I immediately thought of the baby’s mom up on the maternal fetal floor recovering from delivery so far away from her baby. I said a prayer for her as my heart ached knowing how I had felt in the same situation just those few days before. I wished I could reassure her that her little one was ok. I wanted to tell her that he wasn’t alone and offer to sit by his side until he could be in her arms. In that moment little did I know that this baby also had HLHS and that his mom would become a cherished confidant as we travel the “heart mom” journey together.

I was immensely relieved when Danny called to say that the surgery had been completed a bit earlier than expected. I immediately headed for the hospital and of course at this point I was ready to spend every possible second there while Danny was ready to get a break from it.

We knew from pictures we had seen of other babies what to expect Jonathan to look like following his open heart surgery. However nothing can truly prepare you for the sight of your intubated baby with an open chest. I promised myself I wouldn’t cry while I was with Jonathan yet tears automatically sprung to my eyes. The nurses were upbeat and told us how great he was doing but the tears still fell.

From that point forward I don’t remember much of the day. I do remember the nurses caring for him were amazing and completely reassuring that it was ok for us to go home and they would be with him all night. It was gray and drizzling outside in the waning light. On the way out of the hospital I stopped at the nourishment room for crackers and tea. My heart breathed a sigh of relief for my little “lion” as well the little “acorn” across the hall whose mom was now holding him.